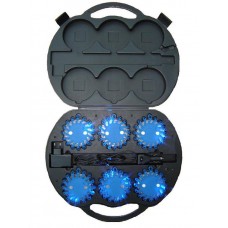 Supplied in a carry case weighing less than 3.2kgs, with in car charger and mains adapter, these red LED hazard lights can be deployed in seconds, placed on the ground, on top of traffic cones or magnetically attached to any metallic surface via their integral magnets.

Knight Pods can be placed on top of traffic cones using our unique magnetic Pod Holder (pat. pending), a simple, fast and effective way of  raising the Knight Pods above ground level and making them even more visible.

There are no sharpe edges on a Knight Pod and with a rubberised external coating they will not scratch or damage paintwork if deployed on vehicle surfaces. Plus they reduce the risk to persons and vehicles if hit whilst deployed, their lightweight and cushioned surfaces are much less likely to cause injury or damage in the event of a collision.

With a circular, self righting design they will always orientate themselves so that their light can be seen, unlike traditional police beacons which can topple over if hit by traffic or be blown over by adverse weather, which usually results in their light being shone into tarmac or space.

With 6 light units in each case, you can deploy lights in lines, directing traffic or personnel identifying hazards, signs or obstacles.

They use a rechargeable CR123A battery so you have no more costly battery replacements to consider which can justify an investment in the Knight Pod within a relatively short period of time.

All six units can be recharged at the same time either in-vehicle or in-house. The recharge cycle time is 2-3 hours.

They are bright, light and take up an absolute minimal amount of room in a vehicle, over an extended period of service this has financial cost savings implications with reduced wear and tear and fuel usage imposed on the carrying vehicle.

These units will withstand severe handling during operational deployment and have a considerably longer life expectancy than traditional light units.

16 red LED's in each unit provide a high degree of redundancy, even if several LED's fail due to damage sustained during deployment you still have a light with operational potential unlike single light source indicator lights.

They are crush resistant and will withstand the weight of a typical family saloon and being powered by LED's they have a considerably longer life expectancy than strobe or incandescent light bulbs.

9 light patterns and an operational runtime of up to 40 hours plus (subject to setting), they can be seen clearly at distances up to 500 metres plus during the hours of darkness and are particularly effective in country and rural locations. In fact the RAF tested the red hazard flares at night in a rural environment and found them visible at 2 nuatical miles!

The Knight Pods effectiveness can be further enhanced by raising it above ground level utilising the Pod holder and positioning the light on top of traffic cones or tubes or the Pod Mat a white reflective plastic disc which reflects light upwards making it more visible from the air.

It's fully sealed, water proof and highly resistant to corrosive chemicals. It has been utilised by the marine sector as a self contained warning beacon (some RNLI stations use them to demark beach landing zones during night time operations and as emergency navigational lights).

They will operate in water and float so have serious marine applications in terms of supplementary warning and rescue signalling.

The list is of potential applications for this versatile device is almost endless and of course they make an excellent warning beacon for motorists who would use the amber varient in the event of a vehicle breakdown or emergency.

All in all the argument to carry a case of Knight Pods is very compelling.

Using pods in lines of different colours is an effective way of identifying different types of hazard or indeed requirement, one such application a customer uses them for is to indicate danger and safety levels - each light band indicates an escalating level of hazard or PPE requirement.


Your Review: Note: HTML is not translated!

Enter the code in the box below: